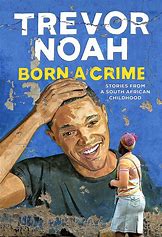 Trevor Noah should be dead or in jail, period. The South African comedian and host of The Daily Show chronicles an incredibly abusive, unconventional childhood growing up in South Africa during Apartheid.

Born to a black mother and a white father, Noah documents his adolescence which begins with a powerful story of his mother having to push him out of a moving car on the way home from church for fear his light skin and her dark skin would get him kidnapped. And the book ends with an incredibly dramatic narration of receiving a call from his younger brother telling him his mother had been shot by his step-father.

But although this book is filled with tales anyone would look upon as horribly sad, Noah writes with a wit and humor that was the insanity of his life. He relates these incredible stories with a sort of…can you believe this happened? I can’t! and I was there! attitude.

In between are stories of a young boy who grew up with a very strict mother in poverty and always in fear of being taken away from her because of his skin color.  Noah would spend all day Sunday going to three different churches with his very religious mother never understanding where her faith came from. He would endure abuse from his step-father, as well as witnessing the abuse his mother endured from her husband, while calling the police to no avail.

At their lowest he ate caterpillars for dinner and slept in different cars at night while the family lived at their father’s auto garage.  His friends were members of gangs.  Hearing gunshots and watching police cars speed by were nightly occurrences. He was sent to jail for borrowing his step-father’s car.

But there are also funny stories woven into the book.  Stories of his first three girl crushes. His unique high school job.  His first (and last) prom that he somehow never attended even though he was there!

But as much as his life was crazy, filled with confusion as to who he really was and crammed with chaos, there was always a sense of unconditional love between a mother and her son, a sense of determination to break the previous patterns of life as his mother tried to do, and to do better.  And he did.