For 25 years Maggie Kennedy-O’Keefe has lived with a terrible secret.  When she was only 15 years old her best friend Eve was murdered.  Maggie and Eve’s sister Nola were unfortunately the ones who discovered her body in the caves below the houses which they lived. But Maggie has always known more than she has told.

In all those years, although there were suspects, no one was ever held accountable for the murder.  There was Eve’s abusive boyfriend who seemed to have an alibi, and even Eve’s sister Nola who was known to be a bit strange to the kids at school and even to Maggie.  Nola had a fascination with death and dissecting animals.

Now, married, pregnant and on the police force which her father had once been Chief, including 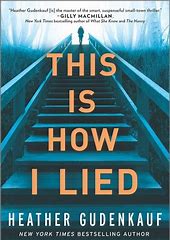 during the time of the murder, a new piece of evidence has emerged which once again puts the case front and center.  The new Chief wants Maggie to take a look at the investigation, hoping she will see something which was missed all those years ago. Reluctantly Maggie has to reopen old wounds for herself as well as everyone else.

Haunting memories of what happened that day years ago begin to flood Maggie’s mind.  And now with the files and evidence she had never been privy to, it only creates more questions and anxiety for her.  Unable to discuss the case with her dad who has retired and has dementia, Maggie begins to re-interview everyone from back then, some like Eve’s sister Nola who seems to hate Maggie for some unknown reason.  Now a veterinarian, Nola has secrets of her own buried deep in the basement of her house. Maggie is also startled to see potential suspects she never new about.

What skeletons lay in the caves and who would want to kill Eve? What secrets are the suspects keeping?  And what is Maggie keeping hidden that no one should ever know…or do they already? She cannot afford to be exposed from all those years ago. Clearly someone knows something and they aren’t talking…but who?

This Is How I Lied is a psychologically fulfilling story with surprising twists and turns which only make you want to keep coming back for more.

With the eccentricity of Fargo and the intensity of Sadie, THIS IS HOW I LIED by Heather Gudenkauf (Park Row Books; May 12, 2020; $17.99) is a timely and gripping thriller about careless violence we can inflict on those we love, and the lengths we will go to make it right, even 25 years later. 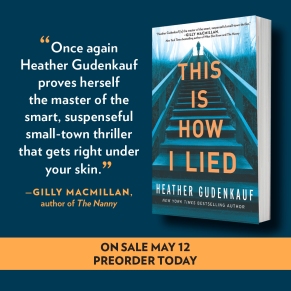 eading going on desk duty before having the baby her and her husband so badly want. But when new evidence is found in the 25-year-old cold case of her best friend’s murder that requires the work of a desk jockey, Maggie jumps at the opportunity to be the one who finally puts Eve Knox’s case to rest.

Heather Gudenkauf is the New York Times and USA Today bestselling author of many books, including The Weight of Silence and These Things Hidden. Heather graduated from the University of Iowa with a degree in elementary education, has spent her career working with students of all ages. She lives in Iowa with her husband, three children, and a very spoiled German Shorthaired Pointer named Lolo. In her free time, Heather enjoys spending time with her family, reading, hiking, and running. 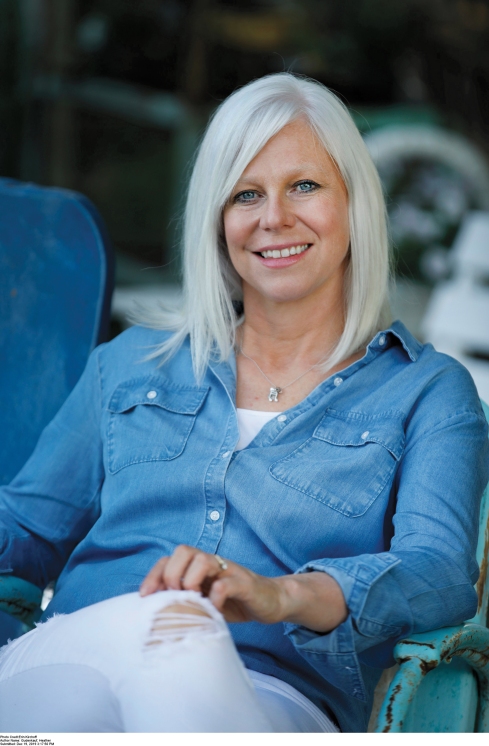 I approach each of my novels with the goal of being a plotter – someone who explicitly organizes and outlines her books – but it never quite works out that way for me. I make notes and outline the plot but ultimately the characters take over and do what they want to anyway. My process is messy and meandering. Thankfully, I have a brilliant editor who is able to see through the weeds and pull out the best parts of my plots and keep me on the right path. This is How I Lied completely evolved from my initial intentions. The characters changed, the plot shifted and the final ending poked its head up near the end of revisions and I couldn’t be happier with the results.

For me, the two go hand in hand. The basic plot line comes first, and close behind comes the characters. It doesn’t matter how suspenseful of a plot I develop, if the right characters aren’t there to mold the story and carry it forward, it won’t work. Before I begin writing, I attempt to give my characters rich backstories. Often many of these details don’t make into the novel, but by fully developing their personalities and biographies, it helps keep me in tune with them as I write. Knowing the characters’ likes and dislikes, their foibles and strengths helps me to honestly and accurately determine their motivations and the decisions they make as they move through the novel.

I’m a news junkie! I’ll scan newspapers and websites and a story will catch my eye. It can be the smallest detail or a broader theme but if the idea sticks with me and keeps harassing me to write about it, I know I’m on the right track. For my novel Little Mercies, it was an article about a social worker who ended up on the other side of the justice system because of alleged negligence with her caseload. From this I created an entirely new story about a social worker who was fighting for her own child. In This is How I Lied, I was intrigued by news stories that dealt with the use of familial DNA to solve cold cases and it became a key detail in the novel’s resolution.

I do listen to music as I write. It varies based on the story and what I think the characters might listen to. By curating these playsets, it helps me get into their mindset. As I worked on Maggie’s sections in This is How I Lied I listened to a lot of Avett Brothers and Lumineers. For Nola, I listened to classical music and hard rock – she’s an interesting mix. As for Eve, since she was sixteen years old and living in the 90s, I listened to plenty of Nirvana and Beck.

Before I started writing This is How I Lied, I read I’ll be Gone in the Dark by Michelle McNamara, about the author’s investigation of The Golden State Killer who, for decades, terrorized northern California. This book both terrified and fascinated me and I became intrigued by how modern technology was being used to close old cold cases. For my project, I thought it would be interesting to explore how this might play out in a small 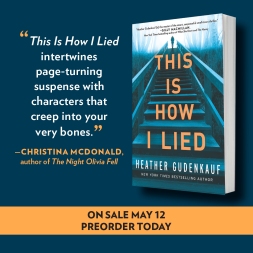 town where the perpetrator thought the truth behind the crime would never be discovered.

As I was writing the novel, I learned about the developments in a 40-year-old cold case not far from where I live where familial DNA was used to ultimately convict the killer. Amazing!

I often get asked what my childhood must have been like because of the twisty thrillers I write. Thankfully, I can say that I had a blissfully uneventful childhood with parents and siblings that loved and supported me. For me, the inspiration from my own life comes in the settings of my novels – the Mississippi River, farmland, the woods and bluffs – all found in Iowa. In This is How I Lied, the town of Grotto is loosely based on a nearby town until I moved to this part of Iowa, I never realized that we had cave systems.  Visitors to the state park, can literally step back thousands of years. The limestone caves and bluffs are beautiful, haunting and have something for everyone. You can take a casual stroll through some of the caves and have to army crawl through some of the others. Old clothes and a flashlight are a must! The caves made the perfect backdrop for a thriller and I was excited to include them in This is How I Lied.

In looking back at all my main characters, though they are all different ages and come from different walks of life, I think the trait that they all seem to have in common is perseverance. I’ve had characters battle human evil and demons of their own creation but it doesn’t matter what traumatic events they have been through or the challenges they will face, they manage to make it through. Changed for sure, but intact and hopeful for the future.

I do love Maggie! As a police detective, Maggie has dedicated her adult life to helping others and is a loving daughter, sister and wife and is expecting her first child. This doesn’t mean that Maggie is perfect. Like all of my protagonists, Maggie is complicated and flawed and has made some big mistakes, but ultimately she is doing the best that she can. 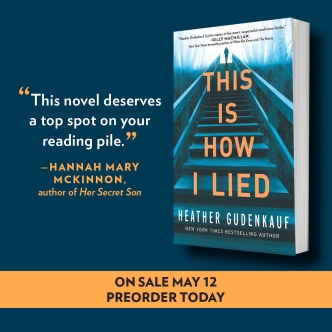 As a former elementary school teacher, I had absolutely no insights into the publishing world beyond what I saw on television and in movies – which portrayed it as a dog-eat-dog world. I have to admit, as a new author, I was very intimidated. But to my delight –  and relief – the people I’ve encountered along the way– my agent, editors, publishing teams, fellow authors, booksellers and readers – all have been nothing but supportive, encouraging and kind.

I just finished the first draft of my next novel, a locked-room mystery about a reclusive writer working on a true crime book when a snow storm leaves her trapped inside her remote home, setting off a series of events that lead to a stunning revelation. It was so much fun to write!

It’s been such a scary, unsettling time but I’ve found writing a nice distraction and a great comfort during this extended time at home. I’ve been able to turn off the news and get lost in my manuscript or other writing projects. It’s a lot like reading – a much needed escape from the real world.

Julia Heaberlin has a new book coming out this August called We Are All the Same in the Dark and it has surged to the top as one of my favorite reads of the year. It has everything I love in a great thriller: a beautifully written small town mystery, with multilayered, unforgettable characters and a twisty plot. It was absolutely mesmerizing.

Thank you #NetGalley #ParkRowBooks #ThisIsHowILied #HeatherGudenkauf. You can preorder the book now with the following links:

1 thought on “This Is How I Lied by Heather Gudenkauf”