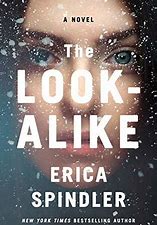 Sienna Scott has always been told she looks exactly like her mother.  But when your mother has suffered from paranoid delusions all your life, it may not be exactly what you want to hear.

As a college student, Sienna accidentally stumbled upon a dead body on campus.  Clearly traumatized she tried to assist the police with everything she saw.  But between her father’s attitude of her not getting involved and her mother’s paranoia, Sienna starts to unravel.  It’s only when she realizes that she and the dead girl were wearing the same jacket that she begins to wonder if she had been the actual intended target.  When she mentions this to her parents she is sent to live in London with her grandmother.

Flashforward 10 years when Sienna, a chef now, decides to come back home and stay.  With her father having passed, she chooses to live with her mother whose delusions seem to have gotten worse through the years and her paranoia even stronger.

She finds out the Chief who was in charge of the school murder is retiring and he wants to reopen the case to see if he can give closure to the family as his last accomplishment.

But what ends up happening is Sienna seems to be the target of someone, reopening her fears that she was actually the intended victim.  Was it really her that the person was after?  Or is she becoming her mother and developing a mental illness she has kept hidden through the years?  She begins her own investigation into the truth.

Scared and confused she turns to those who knew her then and to some she has recently met.  But are they protectors or killers?  How does she know? Or is she just being paranoid…like her mother!

The Look-Alike is a terrific psychological thriller with a little romance thrown in which I must admit I had figured out at about page 100, oh yes, I am that good…WRONG!  Spindler throws enough sneaky clues to lead you down one path, only for you to discover you have been led down a dead end!

My thanks to both NetGalley and Goodreads for the advanced copies.

1 thought on “The Look-Alike by Erica Spindler”