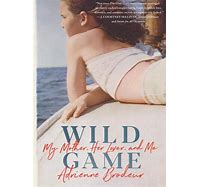 Wild Game is the incredible true story of the relationship between a controlling mother and her eager to please daughter. The story, told by daughter Adrienne begins with Malabar, Adrienne’s mother, waking her up in the middle of the night when she was fourteen to tell her she had just been kissed by Ben Souther. Those simple words would forever change their lives and all their relationships.

You see Malabar was already married. And Ben Souther was her husband’s married best friend. So when she makes this proclamation to Adrienne, her husband is actually sleeping soundly in another room, and Ben’s wife in another.

And thus begins the toxic relationship between mother and daughter in which Adrienne becomes Malabar’s confidant in an affair which would span decades.  A secret which would almost destroy Adrienne’s psyche and a mother who felt nothing she said was off limits. A relationship which would have Adrienne lying to people to protect this love affair, even having to come up with and execute a plan when Malabar believed the affair was going to be exposed. She herself assists in setting up secret meetings for them, even having drinks with them while she was in college at their New York hotel hideaway.

All Adrienne ever wanted was to please her mother.  So if hearing the sordid details of their trysts or protecting the secret even though she hated lying to everybody would make Malabar happy, then that is what she would do.  But, all this secrecy and pressure finally catches up with Adrienne. There were stomach issues which could never be diagnosed, a marriage which should never have happened, and the final internal explosion of being so depressed she could not function normally.  Only then was she finally able to seek the help she needed. And while going through all this, still trying to protect her mother.

She finally became the person she was meant to be, without her mother’s provocation or hearing her mother’s voice in her head. And Malabar, could never understand why Adrienne would not want to listen.  Malabar used her daughter.  Even using a family heirloom to keep Adrienne’s trust, always telling her a necklace passed down from her great grandmother would be hers one day only to then take back what she said on many occasions.

Through therapy Adrienne is even able to forgive her mother, realizing what Malabar did was only what she had witnessed from her own mother as she grew up.  The most important aftereffect to Adrienne was to try and break this cycle if and when she had children.

This is an extraordinary memoir about a girl who had to grow up too fast, whose only goal was to please a mother who could never be pleased. She sadly put herself and her needs on the backburner and allowed this secret to haunt her life because if found out it would ruin her relationship with the person she idolized the most. Not realizing she herself is and should be the most important person in her life.

Wild Game has just come out in paperback.

2 thoughts on “Wild Game My Mother, Her Secret and Me by Adrienne Brodeur”